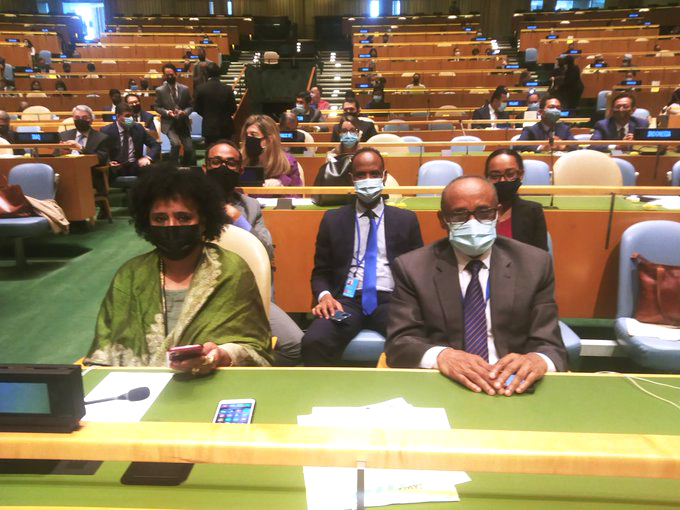 New York, 14 October 2021: Eritrea is pleased and highly honoured to be re-elected to serve in the United Nations Human Rights Council for the period 2022-2024. The Human Rights Council is the UN’s intergovernmental body that deliberates on issues pertaining to the development, promotion, protection, and fulfilment of international human rights law, norms, and standards. The African Union endorsed Eritrea’s candidature for the Human Rights Council. Its new three-year term on the Geneva-based Human Rights Council will begin on 01 January 2022. Eritrea extends its deepest gratitude and appreciation to the Member States of the UN for their genuine consideration and invaluable support of the country’s candidacy.

Eritrea is a country that emerged out of a long and difficult struggle for human rights. It achieved formal independence in 1993, after a 30-year war for independence. Non-discrimination, equality, inclusion, peace, justice, freedom, and ensuring respect for human rights and human dignity are key values underpinning the Eritrean society. The country remains vigilant and steadfast in its efforts to implement all civil, cultural, economic, political, and social rights for all its citizens. It aspires to be a harmonious and a developed nation where the full potential of its entire people, including women and children, is realized with strong national unity and cohesion, sustained economic growth, and social justice.

Eritrea is strongly committed to consolidating the rights of its citizens, and it has made significant strides in improving the educational and health services, agricultural productivity, reducing poverty, and developing infrastructure. Eritrea is also making significant contributions to regional peace and stability in the Red Sea and the Horn of Africa.

As part of its commitment to effective implementation and monitoring, Eritrea has fulfilled its reporting obligations and participated in numerous international and regional treaty body reviews. Eritrea presented its report under the third cycle of the universal periodic review during the 38th session of the Human Rights Council in 2019 and accepted 131 new recommendations. It will continue to accelerate mainstreaming its international commitments in its national development programmes.

Human rights are universal, indivisible, interdependent and interrelated, and all human rights should be treated equally. During its current membership in the Human Rights Council, Eritrea has made a modest contribution to ensuring an efficient and effective Council. Significantly, it has been working with members of the Council and the broader membership of the UN for the principled implementation of the UN human rights declarations, action plans, conventions, and resolutions.

Eritrea firmly concurs with the wider view of the UN membership that human rights objectives are best promoted in all countries through constructive engagement and mutual respect. Dialogue and cooperation enhance the effectiveness of global human rights mechanisms. Conversely, confrontation, double standards, and politicization contribute to polarization and the erosion of the credibility of human rights mechanisms.

Eritrea is proud once again to serve on the UN Human Rights Council. It is not a responsibility that the country takes lightly. It will remain fully committed to protecting and promoting human rights at a national and international level through supporting international partnerships and dialogue on human rights, and advocating for an effective, non-politicized and credible Human Rights Council.